Temple Health Cover
Skip to content
Retirement is the ideal time to reassess your health and fitness
May 9, 2018by Sarah Geraghty
Sarah Geraghty May 9, 2018 No Comments 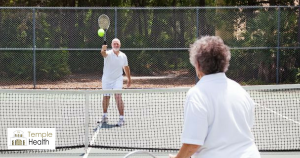 Carola Becker is a nutrition coach and key speaker on nutrition who creates personal programmes to meet your health and fitness goals. In this article, she demonstrates how a recently retired couple found that losing weight came with unexpected benefits.

Mr and Mrs D, both in their late 50s, retired in July 2017 after working full time for over 40 years. Mr D held a management position in a London based firm and spent lots of time traveling all over Europe. Mrs D worked as an accountant for an investment bank.

Both Mr and Mrs D always lead a busy life, working long hours with very few holidays. Even though both love to travel, they wanted to enjoy their retirement at their west country home. Besides engaging in the social activities in their village, they plan to visit their grown-up children in Australia and Canada once or twice a year.

Mr D always had a robust constitution and was generally healthy whilst Mrs D suffered from high blood pressure.

Initially, after retirement, Mrs D kept herself busy by joining the local Women’s Institute, but Mr D realised soon that he got bored, had difficulties finding a new hobby, spent hours in front of the TV and gained weight. He became frustrated and unhappy. Due to their busy lifestyle in the past, their eating patterns were always erratic. Since retirement, Mr D started eating because of boredom whilst Mrs D overindulged in home-made cakes and biscuits. Their doctor warned them of their risk of developing diabetes 2 if they did not start changing their lifestyle and diet.

They contacted Carola to seek support with personal nutrition and lifestyle coaching. Carola suggested a coaching programme over 6 months and they agreed on the following health goals:

Carola provided an initial evaluation of Mr and Mrs D’s eating habits, assessed their nutrient and mineral levels and suggested changes in their diet to address a number of deficiencies with a personalised meal plan which included food lists, recipe suggestions as well as a pantry makeover.

During the first two months, Carola arranged weekly consultations to help with habit forming, addressing the stages of change, help with questions, discuss the issues of the last week and discuss any upcoming challenges. Each consultation was followed up by Carola with a written summary of the points which were discussed. After two months fortnightly consultations were arranged to help both keeping on track and discussing next steps.

Carola was keen not to interfere too much with lifelong habits like missing breakfast. But she made sure that Mr. and Mrs D were prepared for a hunger pang around 10:30 – in the past they both would have simply eaten whatever was in reach. Now they choose healthy snacks which supported their metabolism and energy levels throughout the morning until lunchtime. Mr and Mrs D realised that they would prefer a substantial, warm meal at 14:00 and light dinner at 17:00. Carola accommodated this idea with a fully flexible meal plan.

Mrs D was adamant to keep her blood pressure under control and with the help of Carola’s carefully designed eating and activity plan she was able to reduce the dosage of her medication after only two months. Her doctor has confirmed that her new lifestyle regime may lead to a normalised blood pressure in the future.

After a few weeks, Mr and Mrs D decided to join the local Tennis club and learn to play Tennis together. This has now been established as a regular, bi-weekly activity they both enjoy and since the club offers a covered court, they continue playing during the winter months. The newly adopted exercise regime was a welcomed fixed date in their calendar which added structure and leverage to their success.

Carola’s coaching helped Mr D realising that reducing his alcohol intake helps his energy levels and sleep. He has adopted alcohol-free weeks and drinks only socially which helped him reach his goal of losing 1 stone.

Carola provided a list which emphasized the best foods for addressing their nutritional deficiencies. Mrs D embraced the idea of creating new meals with unknown ingredients but was able to amend old favourites and made them healthier, too. Carola’s recipes helped her making an initial start, but she became more adventurous soon and tried lots of new recipes herself.

Initially, Mrs D was concerned giving up her beloved cakes and biscuits. But since she has reached her goal of losing 2 stone and managing her blood pressure successfully, she bakes a cake once a month as a special treat for her husband and herself. Both Mr and Mrs D feel years younger and are looking forward to a healthy and active retirement.

Their doctor has now confirmed that there is currently no risk of developing diabetes 2. He suggests continuing with the new eating and exercise regime.

This article was provided by Carola Becker, a Nutrition Coach, and Key Speaker.

Top
In addition to essential cookies, we use Google Analytics to report usage statistics of this website. Are you ok with that?YesNoLearn more